Our small yet highly motivated team has been managing the association alongside Martine Sinandja since the year 2000. Martine is from Togo and is currently the Director of the "Yanfouom - La Sagesse" school she founded.

Catherine André and Cédric Roy are respectively President and Treasurer of our nonprofit organization. They both have ample experience in Togo as well as with the Youfouom School. Catherine volunteered in the region from 2000 to 2003 supporting local causes developing environmental protection projects (water, erosion, organic vegetable gardens and waste management). Cédric was able to participate actively as a teacher at the Yanfouom School the first year it opened (2000-2001).

Agnès Barbaro, our secretary, led and organised the Educational Vegetable Garden Project with The Lycée Horticole d’Evreux in 2004. She also played a fundamental role in sending a delegation of 12 students from the Yanfouom La Sagesse School accompanied by Martine and her Assistant Director, M.Songui, to France in 2005 !

Translation via GlobalGiving TIME : Thanks you to Séraphine D. and Amelia B. 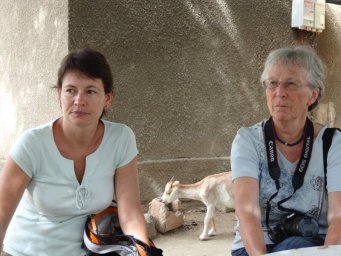